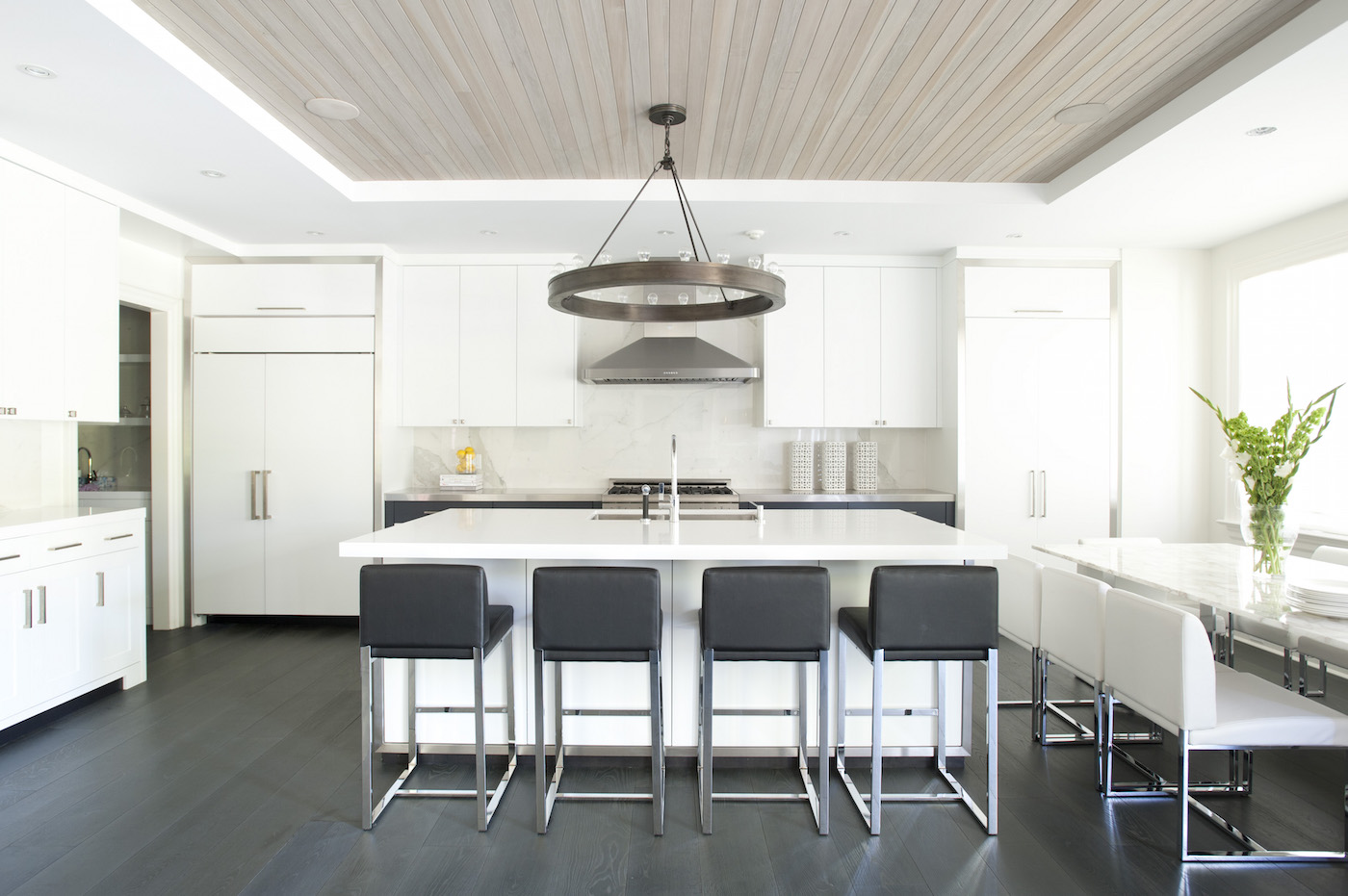 When the departing homeowner of a 19th-floor suite at 110 Bloor Street West first stepped into the unit seven years ago, he was blown away by the uninterrupted city views from the 30-foot-long south-facing windows. “It’s stunning during the day,” he says. “But at night, its like, wow!” The former North Toronto resident was attracted to the luxurious condo building, because of its reputation for being structurally solid and soundproof – not a given in the downtown condo market. The other big draw was its Yorkville location. “I was single at the time and downtown seemed the place to be,” he says. When the owner took possession of the suite (now being sold through real estate agent Elli Davis), it was a dark place, some of the walls had dated tiling—and it was divided into small rooms. It also lacked walk-in closets. “We just leveled everything and completely rebuilt it from scratch,” he says. Bill Mockler and Stuart Watson, partners in the firm Drawing Room Architect Inc., were enlisted to handle the redesign. The collaboration worked well thanks to a shared vision of a clean, contemporary design. Communication and trust were key too. “For anything that turns out this well, it’s all about taking time to talk with your client and being thoughtful about all the possibilities,” says Mockler. “It really helped in this case that the homeowner was very open to giving us poetic licence.” All parties agreed that the view of Toronto was “the coolest picture in the whole apartment,” says Mockler. “The idea of one great room from which to take it in appealed greatly to the homeowner—he could enjoy it every day, even doing something as simple as having a coffee.”

So the designers suggested creating two closed bedrooms with their own bathrooms, then integrating the kitchen, dining room and living room into “one happy space.” The main challenge of knocking down walls and undertaking major construction work within a condo building is not disturbing the other occupants. “You can’t make noise early in the morning and the contract workers have to be very cognizant of the importance of good neighbourly relations,” warns Mockler. That’s why Mitch Kleinstein was hired for the job—reputed for his sensitivity and extensive experience in condo renovations. And then there was the question of how to illuminate the space beautifully, given that the ceiling was a concrete slab coated in plaster into which drilling was not allowed. Recessed lighting was not an option, but the design team came up with interesting alternatives. They created a custom light fixture, cantilevered off the wall, to showcase the large-scale Uno Hoffmann piece in the living area. A series of wall-mounted gallery lights the length of the hallways were installed in anticipation of the homeowner hanging a growing collection of artworks there. In the kitchen and dining areas, a floating canopy allowed concealed junction boxes and wires to be installed so that the counters and dining room table could be lit from above. The bonus of this necessity-driven feature: the slightly lower ceilings subtly defined the cooking and eating areas without the need for walls.

The original herringbone hardwood flooring was left intact throughout the living and sleeping areas – it adds interesting texture and pattern to the otherwise minimalist space. “The general idea we had was that the apartment would be rather Corbusian,” says Mockler. “So we went with pure white walls and ceilings against which the fine pieces of furniture and colourful spines of the extensive book collection would pop.” In the main living area, a grey Flexform sofa faces black leather Minotti chairs across a modern B&B Italia coffee table. Soft and pliable, the sofa is not just elegant but also extremely comfortable. The chairs swivel, allowing the homeowner to face the wood-burning fire or the city. Before the renos, walls flanked the fireplace, but it was a conscious decision to make it more discrete and ambient. “In the past people sat around the hearth for warmth and it was a focal point of the room,” says Mockler. “Nowadays, we have so much more going on, between iPads, city lights and TV, that we think of it as being there more to create a glow in the background.” An avid reader, the homeowner’s favourite spot in the house is the library/dining room. “When I come home after work, the first thing I do is sit down to read the newspaper and later a good book,” he says. After dinner, he tends to catch up on the news off to the side of the main seating area in his media corner with its 72-inch screen TV.

Married in recent years, the homeowner is less inclined to cook than his wife; however he put much thought into creating the perfect chef’s kitchen – equipped with top-of-the-range appliances – back when he bought the space he now occupies with his wife and her grown-up daughter. Keeping the cityscape visible from the cooking area, yet shielding food preparation and dirty dishes from the view of dinner guests was a priority. “Figuring that out was a hoot,” recalls Mockler. “In the end we used LED lighting under a glass screen, and we frosted the bottom of the screen so even though it was illuminated, you wouldn’t see the dirty dishes.” The white scheme used throughout the condo is interpreted with more texture in the bathrooms. “A purely white bathroom can be sterile, so we loved bringing in the warmth of the greys and browns in the Calacatta marble,” says Mockler. In the ensuite bathroom, a flat-screen television is positioned in such a way that the homeowner can catch the CNN headlines through the glass wall of the double shower or take in a movie properly while soaking in the deep Bain Ultra airjet tub. Double sinks with contemporary curved faucets make morning grooming à deux not just possible but pleasant. Sconce lighting casts a flattering glow and yet is bright enough for applying make-up or shaving. While everything has been taken care of to the tiniest detail in this 3,200-square-foot condo, what the homeowner loves most about this bathroom is the bigger picture: “It’s very large and very bright,” he says. “I think it’s just amazing.”